Sollys was established in 1928 by Ken Solly in Collingwood, Go9lden Bay, with the purchase of a 1928 Chevrolet truck. Ken started by servicing the small ships that came around the coast from Collingwood and delivered the goods that came off them. Ken then used this vehicle to establish a freight run from the western area of Golden Bay to Nelson. This was generally a two-day run when many sections of the road were merely a gravel track.

During the 1930’s Ken had 12 staff and built the fleet up to 7 trucks. Two of these trucks were  requisitioned for army use during World War 2. The business thrived, expanding to a dozen vehicles as well as the establishment of a quarry and plant to manufacture agricultural lime. Ken had two of his sons, Trevor and Noel working with him during the 1940s. In the early 1950s Trevor took over the business.

During these times, the fleet saw the inclusion of WTL Bedford’s which then moved on to the O Series Bedford in the late 1940s. The first of the big trucks to grace the Sollys fleet was the S Bedford. The S Bedford’s only had 4 gears to choose from but did not go too badly up the Takaka hill. It was only when you went downhill the problems began - the brakes were only on rods and nothing worked very well, you had to stay in low gear otherwise you were a goner. Drivers used to drive down the hills with the door open in case they needed to bail. 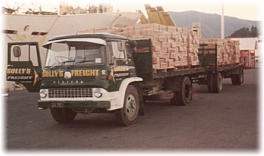 Eventually the TK Bedford’s came along; these even came complete with a trailer. This modernisation cut travel times down dramatically with the trip between Richmond and Collingwood down to 4 hours and 17 minutes. Another milestone involving the TK’s was when the Leyland 400 came out. Before that the Bedford’s had a 330 diesel which was about 103 horsepower then the Leyland came on the road with a two speed Eaton diff. These really did the job; it was a major move forward for the TKs. They were a 5 speed / 2 speed but the drivers were never allowed to change the button down below third gear because if you did that on the Takaka Hill then you would usually blow your diff out or something else. So, you had to go down from high range to low range much sooner than you would normally do.

Trevor's sons Merv and Brian joined the staff in the 1960s, taking more responsibility for running the expanding transport and earthmoving business. When Merv started with his father the company was still based in Collingwood and carried out traditional rural carriers’ work. Sollys was heavily involved in work for the surrounding farming community and the local dairy co-op. When it came to the operations of the company, all the organising was done at night. You would drive during the day and then at night would organise the next day’s work. There were no mobile phones around then. The number for Sollys on the telephone exchange was 7.

Work started getting harder, with arduous roads and heavy labouring. The old road from Collingwood to Takaka took two hours to complete in the old TK Bedford’s while the new road takes an average of 25 minutes by car. Stock was carried all over the country in old crates with overhead pens. The run to Temuka from Takaka took 18 hours and Gore took 44 hours, nonstop, in the TK Bedford’s. Drivers would go out two up to accomplish such long runs, driving for two hours then resting or sleeping for the next two.

It was the introduction of the first Isuzu, a 256hp model with the set forward axle, which revolutionised the trip times. Suddenly the run to Temuka was halved to only 9 hours and this brought an immediate end to the double manning. The power and reliability of the Japanese trucks would set the company on the path that sees most of its fleet sourced from the Japanese markets today.  An issue around the gudgeon pins in the 370hp Isuzu’s saw the company venture towards other Japanese brands and lead to the addition of Nissan Diesels to the fleet (which later became UD). Both brands are still very prominent in the fleet today. 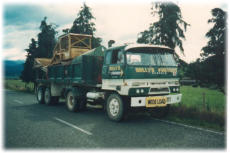 Merv took over the company in the late 1980s and it has continued to grow into the 21st Century. Today's organisation is a far cry from the seven truck, one-yard business it was in the past; Sollys now has over 100 trucks on the road and employs around 140 staff. Not to mention the large variety of construction and mining equipment they have for their civil construction and extractive mineral divisions. Merv now works with his son Ed and daughter Adele and has established depots in Collingwood, Takaka, Richmond, Christchurch, and Blenheim. It has always been said that it is the service and making the customer the priority that continues to see Sollys grow and prosper.